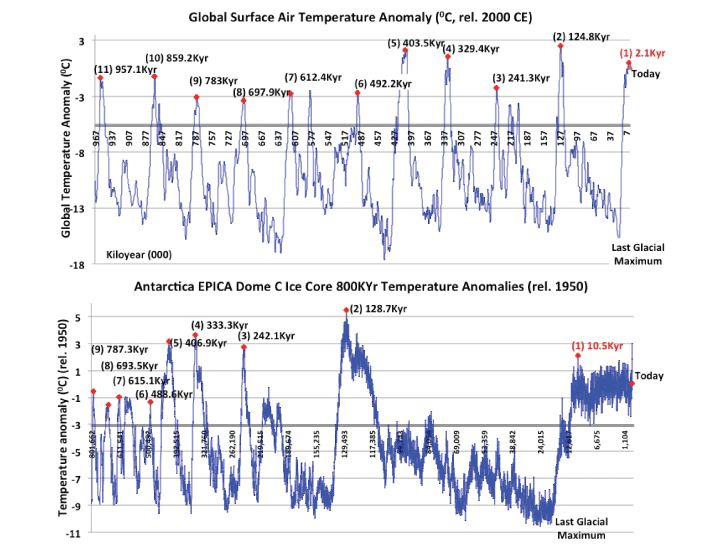 Based on the above graphics, and the Antarctic-global climate optima phasing gaps and inter-climate optimum intervals, there is no justification for proposing the ice age lies ahead of us. However, this did not stop the Intergovernmental Panel on Climate Change (IPCC) from delaying the next ice age by 30,000 years, in its advice to our governments. The IPCC told our governments that this theoretical delay represented a supposedly “robust finding,” despite not subjecting their new theory to peer review. [3]

Delaying an ice age by 30,000 years cannot be statistically justified on at least three counts. By delaying the ice age 30,000 years a statistical outlier (P-value <0.05) is created for interglacial durations, inter-climate optima intervals, and Antarctic-to-global climate optima phasing gaps, and the data is changed from having a normal distribution to a non-normal distribution. If normal science were operating in an “unimpinged manner” in the climate science field, it would emphatically reject the IPCC’s perilously dangerous 30,000-year delay to the start of the next ice age.

Click on this page and download a free copy of my book “Revolution: Ice Age Re-Entry,” and read more about this topic in Chapters 2 and 3.

[3]      IPCC, Climate Change 2007: The Physical Science Basis. Contribution of Working Group I to the Fourth Assessment Report of the Intergovernmental Panel on Climate Change [Solomon, S., D. Qin, M. Manning, Z. Chen, M. Marquis, K.B. Averyt, M. Tignor and H.L. Miller (eds.)]. Cambridge University Press, Cambridge, United Kingdom and New York, NY, USA, 996 pages [Exposé: See page 56, Box TS.6. This section details the influence of earth’s orbit of the sun on the onset of an ice age. We are told how the Milankovitch theory, associated with controlling ice ages, is a well-developed theory (Whereas it is contentious). The IPCC tells us that global warming won’t be mitigated by changes in earth’s orbit (i.e., which decreases solar irradiance at the upper atmosphere), and that earth will not enter the next ice age for 30,000 years. More worrying, on page 85, section TS.6.2.4, it is re-emphasized that earth will not enter another ice age for 30,000 years or more, and that this was a “robust finding.”

This site uses Akismet to reduce spam. Learn how your comment data is processed.